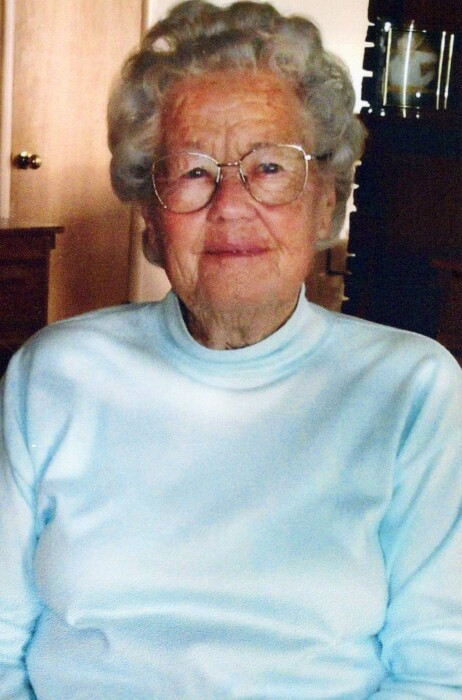 Geraldine Elsie Mirich – Jerry, as most knew her – passed away peacefully at the Weston County Hospital on June 8, 2021. She was 97 years old.

Jerry was a strong woman: responsible, independent, kind and loving. Her life wasn’t easy, but as she said many times, “I’ve had a great life and I would do it all again, never changing a thing.” She truly was a GEM (her initials) sent to us by God.

She was born in Chappell, NE, on February 19, 1924, at her grandparents’ home. She was the firstborn child of Wyatt Weir Sheldon and Elsie Marie Sheldon. When she was five years old, her family moved to Upton, WY. Jerry lived in the area until 1941 when she married Steven Mirich, Jr., whereupon she moved to the ranch in Thornton, WY (no longer a town). The ranch was her home of eighty years.

Jerry and Steven raised four children: Carl, Marvin, Carolyn and Mary Dale. Their first home was a two-story log house constructed in 1900 which did not include any modern facilities. In 1958, the family built the present ranch house, and a dream she never gave up on came true.

Jerry was the flue that held the ranch together. She, Steven, and her brother-in-law, George, did the ranching. She also worked jobs outside of the ranch. She worked at the American Colloid Bentonite plant and the B and R grocery store. She was very grateful to Lynn Jespersen and wife Sheri for joining her and Steven to operate the ranch in later years.

Jerry was a wonderful wife, mother, rancher, seamstress and carpenter. She helped design the ranch house and did a great deal of the construction. She was a school bus driver for 25 years, a 4-H leader, and a caregiver to her in-laws and later her mother. She gave unselfishly of her time.

Jerry loved playing all kinds of cards, but especially bridge. She belonged to several bridge clubs and played cards up until her death. Big game hunting was another love. Jerry and Steven hunted in the Jackson Hole area and the Big Horn Mountains with several different people in the community, and she guided out-of-state hunters in the Big Horns for many years. She bought a motorcycle after her kids left home. She played softball – a standout first baseman – and enjoyed bowling and snowmobiling. On her 80th birthday, Jerry snowmobiled through Yellowstone National Park with family. She loved to travel. With the exceptions of Alaska and Maine, Jerry visited every state.

Jerry refereed hundreds of ball games – from the stands. She never missed sporting events her sons competed in. She played basketball while in high school and wished Title IX would have been legislated earlier so her girls would have had a chance to participate. She supported her grandchildren and great-grandchildren in their activities and was always so proud of them.

Jerry is preceded in death by her husband Steven; sons Carl and Marvin; grandson Marv and granddaughter Audrey Kay; daughter-in-law Mabel Anderson; son-in-law Doug Giberson; and her parents and mother-in-law and father-in-law.

In lieu of flowers, donations can be made in Jerry’s memory to the United Methodist Church or the Upton Gun Club. Condolences may be sent to the family at PO Box 183, Upton, Wy 82730.

To order memorial trees or send flowers to the family in memory of Geraldine Mirich, please visit our flower store.