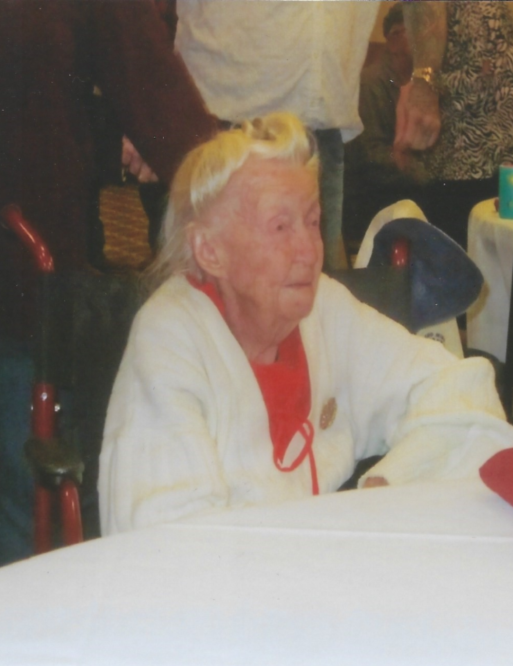 Mass of Christian Burial for Fern Porter will be held at 10:00 a.m., Saturday, May 30, 2020 at Corpus Christi Catholic Church with Father Brian Hess officiating; interment to follow at Greenwood Cemetery in Newcastle, WY. To protect the health and safety of all, due to COVID 19 the funeral service will be limited attendance as required by state authorities and CDC. Visitation will be held from 5:00 p.m. to 7:00 p.m., Friday, May 29, 2020 with Vigil to begin at 7:00 p.m., at Corpus Christi Catholic Church; this too we will only allow the limited attendance of 25 in the building at one time at a rotating basis; we encourage the wearing of personal protective equipment. Fern Isabell (Rosean) Porter, lifelong Newcastle resident, passed away peacefully on May 25, 2020.  Fern was on February 13, 1920, to Agnes and Phil Rosean. She was born in her aunt’s millinery shop which was located behind Newcastle’s present-day post office. One of the highlights of her life was her 100th year birthday party in February. Fern never lost her sharp mind and excellent memory, although impaired hearing sometimes put her at a disadvantage. On October 31, 1941, Fern married Daniel Porter. They had been married 66 years at the time of his death in 2007. They raised seven children. Before her marriage, Fern worked in an abstract office in Cheyenne and at the First State Bank in Newcastle. She worked alongside her husband in their dirt moving business. She had many roles in their business, but she most remembered being assistant mechanic and operating some of the smaller equipment. Fern and Dan spent their retirement years in the cattle business on the family ranch. She handled the ranch leases until her death. The family ranch is honored as a Wyoming Centennial Ranch. Fern sold Amway for more than 50 years and continued to make deliveries to Gillette until shortly before her death. Fern devoted herself fully to being a mother, grandmother, great-grandmother and aunt. She spent many years as a Cub Scout and 4-H leader. Until COVID-19 (Coronavirus), she was a fixture at her great-grandchildren’s musical and sporting events. Fern’s devotion to family included being caregiver to her elderly mother and three aunts in her home until their deaths. Fern was a master recycler, an accurate historian, and a clever crafter. She loved hunting season – greeting and visiting with all the hunters. Some out of state hunters and their families became lifelong close friends. Some returned year after year to the ranch for over 50 years. Fern was a woman of unshakable faith. Her faith and prayers carried her family through many trials of life. Fern is preceded in death by her husband, Dan; her daughter, Mary McGlaughlin; granddaughter, Jayme Green; grandsons, Tyler Porter and Philip Toliver Cash; and great-grandson, Cameron Liggett. Fern is survived by sons, Danny (Sandy) Porter of Gillette; Ed (Cindy) Porter and Mike Porter of Newcastle; her daughters, Kathie (Gene) Morgan of Washington, Utah; Ruth Liggett of Newcastle, and Sandy (Jake) Clouse of Thermopolis; as well as 22 grandchildren and 14 great-grandchildren. Memorials and condolences may be sent in care of Meridian Mortuary 111 S. Railroad Ave, Newcastle, WY 82701. Condolences may also be expressed at www.meridianmortuary.com

To order memorial trees or send flowers to the family in memory of Fern Porter, please visit our flower store.