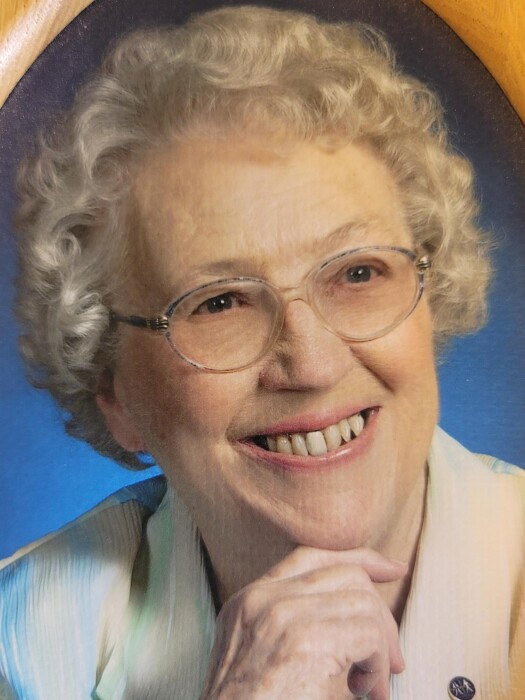 Dorthea Mae Lewis was born on May 17, 1922 to Perle Mortimer Lewis and Bertha Mae Sheesley in Steamboat Springs, Colorado.  In May of 2022, she celebrated 100 years of joyful living and passed away peacefully on October 22, 2022 in Newcastle, Wyoming.

Dorthea was raised in Ten Sleep, WY .  Due to World War II and a shortage of teachers in Wyoming, Dorthea started her teaching career early with just a teacher certification from the Department of Education. She taught for a short time in Ten Sleep where she was mortified to have her 5 year old younger sister, Norma, in her class. At this time too,  Dorthea met “ The Love of Her Life”, Floyd Heitz, at a dance in the Ten Sleep Community Hall. Floyd had recently returned from the war and was working with friends in Ten Sleep.  Floyd courted Dorthea, which became a challenge as Dorthea had been transferred to Lander, approximately 140 miles away, to teach. Dorthea and Floyd continued their courtship by bus – one or the other traveling to each other

Floyd and Dorthea were married on June 20, 1947 in the little white Methodist church in Ten Sleep.  Their union was blessed with four girls, starting in 1948, and finally a boy in 1957 (Floyd yelled “He’s a She, I mean She’s a He”). They moved to Worland in 1950 and purchased a small house on Thomas Ave. When Floyd Jr (affectionately known as Skip) was old enough to attend school, Dorthea began teaching again - English and literature in the Worland Sr High School.  She continued teaching in Worland until 1968 when Floyd was transferred by Texas Gulf Sulphur Co to Houma, Louisiana. What a culture shock that was!!  But the whole family embraced the experience and still maintain relations with some of the people they met down there.

Dorthea continued teaching in Houma in a school that had just been de-segregated.  She returned to school and in 1970 she earned a master degree in counseling.  She never got the chance to use her counseling degree but continued teaching and never regretted getting that degree. Education was important to her. In 1973 Floyd was transferred to Green River, and Dorthea began teaching at the Green River Junior High School. In 1980, Floyd and Dorthea decided to retire and they returned to Worland, purchased a house, renewed their old friendships and were very active in the Worland Methodist Church as religion was always central to their lives.

In 1982, the love of Dorothea’s life, Floyd, died of lung cancer. Dorthea moved on, keeping busy with her church and friends. Some years later, a very good friend of the family, Harry Kenagy (who also had lost the “love of his life”) and Dorthea started dating. They were married in 1988 in the Worland Methodist Church. Dorthea described Harry as her “Soul Mate”. They enjoyed so many of the same things – reading was at the head of the list but they also both loved to travel and square dance until Harry passed away.

Dorthea was preceded in death by both of her husbands, Floyd Heitz and Harry Kenagy;  her parents, Perle and Mae Lewis; her younger sister and brother-in-law, Charles and Norma Yoos;  and her darling youngest daughter, Nancy Stephenson (Jack).

A grave side memorial service will be held in Worland in June, 2023 when family will gather with friends to celebrate Dorthea’s life. Date to be announced at a later time. In lieu of flowers or cards, the family requests that donations might be made to The Circle J Ranch which always had a special spot in the hearts of Dorthea, Floyd, and Harry. Condolences  can be sent to Meridian Mortuary, 111 S. Railway Ave., Newcastle, WY, 82701 or at www.meridianmortuary.com.

To order memorial trees or send flowers to the family in memory of Dorthea Kenagy, please visit our flower store.