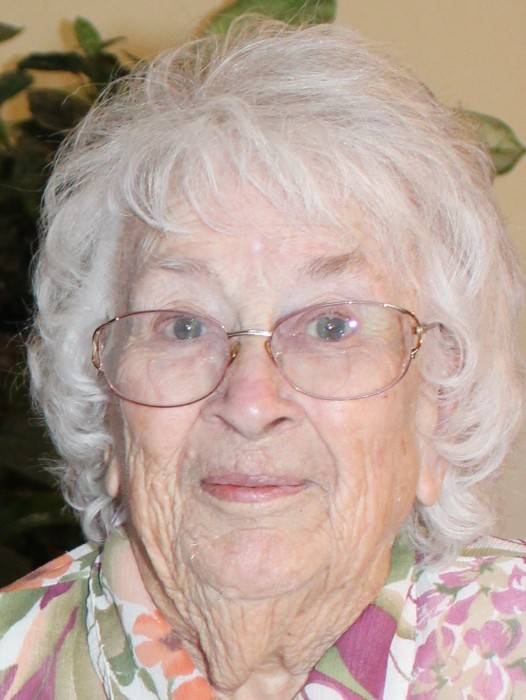 Adelaida (Eda) Gose, 90, died peacefully in her sleep on September 26, 2019 at the Weston County Health Services.

Eda was born to Julius and Martha Frederiksen at home on the ranch near Horton, WY on October 11, 1928, the first of six children. She graduated from Newcastle High School in 1945 and attended Black Hills Teacher College graduating in 1946. She started teaching in rural schools in fall of 1946. Her last year teaching was 5th and 6th grade in Sundance, WY. She met her future husband, Donald Gose, at a dance in 1947 and had their first date at the Belle Fourche, SD Roundup Rodeo and carnival. They married June 14, 1948 and survived their first winter together with the blizzard of ’49.

Don and Eda became proud parents to Kevin, born December 1958 and Pamela born August 1960. She loved being a ranch wife until they sold the ranch and moved into Upton in 1994. Eda was a 60-year member of Eastern Star in which she was the organist for the majority of that time, even being appointed as Grand organist for Grand Chapter Order of the Eastern Star of Wyoming for a year.

Eda was also a member of Beta Sigma Phi Sorority, Daughters of Niles and United Methodist Church for many years.

Don and Eda enjoyed Square Dancing in Clubs in Upton and Sundance and weekly games of Bridge. The club she most enjoyed was the Grandma Club, working hard being the best grandma ever as she would tell her grandchildren, “My grandma lived in Denmark, so I never got to have a grandma to visit.” She accomplished that goal with flying colors as she made memories along with their messes.

Eda was survived by her husband of 71 years, Don. Her children, Kevin (Shari) Gose of Sundance and Pamela (Alan) Williams of Belle Fourche, SD. Her grandchildren, Jarrod of Pine Haven; Cassie of Gillette; Shelby of Casper; and Cody of Douglas. Her great-grandchildren, Emmalyne, Bailey, Sean, Jeremiah, Donald, Aiden, September, Chloe and Macie. Her brother Karl (Joan) Frederiksen of Casper and many nieces and nephews.

Eda was preceded in death by her parents, siblings, Ellen, Anna, Irene, and Kenneth, and her grandson, Jordan Gose.

In lieu of flowers the family request that donations be made in Eda’s name to benefit the Upton Ambulance Services. Viewing at 11:00 a.m., Tuesday, October 1, 2019 with a luncheon directly after and services at 2:00 p.m., at the Upton Community Center. Memorials and condolences may be sent in care of Meridian Mortuary 111 South Railroad Ave, Newcastle, WY 82701. Condolences may also be expressed at www.meridianmortuary.com

To order memorial trees or send flowers to the family in memory of Adelaida "Eda" Gose, please visit our flower store.