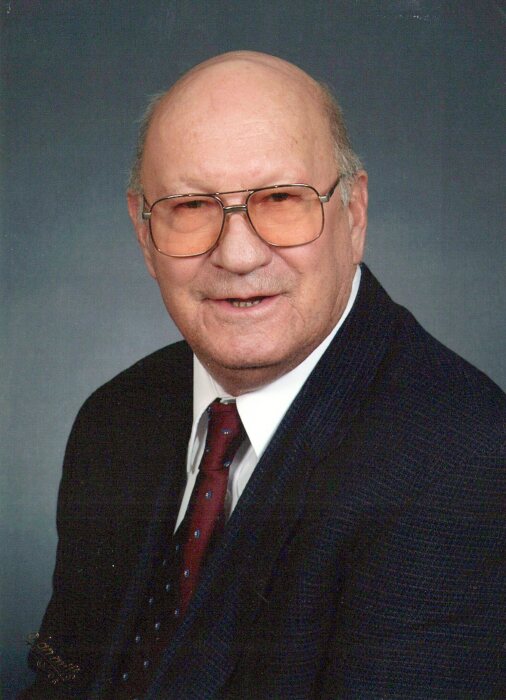 John was born in 1935 to Lawrence and Anna (Schmitt) Ellis in Upton Wyoming.  After a short stint in Pocatello, Idaho the family returned and made their home in Newcastle.  John attended and graduated from Newcastle High School. John’s high school career included playing running back for the Newcastle Dogies and ranking fourth in the state for wrestling.  A very swift runner, he would take bets on his sprinting abilities.  He wasn’t quite fast enough to outrun Genevieve Ann Pziniski. In 1954, they were married at Corpus Christi Catholic Church. John and Gen were blessed with two sons, John Stanley in 1955, and Craig Lawrence in 1961.

John served his country in the National Guard for more than eight years and supported his family through his work with the Wyoming State Transportation Department. During his forty years with the Transportation Department, John operated heavy equipment and drove the snowplow. The winter months were especially exhausting. John worked tirelessly at keeping the roads clear and safe, often putting in many hours of overtime, and missing out on family activities.

In 1974, John and his son formed J and J Construction and began building Midwestern Homes. This included an extensive rejuvenation of an entire block of Walden Avenue in Newcastle.  This neighborhood dated back to the 1890’s and included outhouses and horse corrals as well as nearly 100 years of accumulated rubble. The family cleaned up the area and replaced it with new homes, essentially creating their own neighborhood.  In total J and J construction built more than 23 homes in the Newcastle area.  An active real estate developer, John owned and maintained two mobile home courts as well as multiple rental properties.

John worked hard his entire life. In 1988, John assisted his son, John Stanley, with the opening of the Weston County True Value Home Center.  After putting in a full day's work at the Transportation Department, John would report to True Value for an additional two hours helping his son close the store each day.  On Saturday’s John worked at the True Value from opening to closing making a fifty-four-hour work week.  When he retired from the Transportation Department, he continued to work six days per week at True Value.  Even with this grueling schedule, he still found time to take care of his own home and yard as well as spend time with family.

An avid outdoorsman, John enjoyed hunting, fishing, and camping with his sons and grandchildren.  In his retirement, John and Gen were able to travel throughout the country, including a three-week trip with Craig’s family to the Canadian Rockies, trips to Branson and California with Gen’s siblings, multiple trips to the True Value Market in various locations in the U.S., and several cruises.

Mass of Christian Burial will be Wednesday, Apr 27, 2022at Corpus Christi Catholic Church in Newcastle, with Father Brian Hess officiating. Condolences may be sent to the family in care of Meridian Mortuary, 111 S. Railroad Ave., Newcastle, WY, 82701 or expressions of sympathy may also be made online at www.meridianmortuary.com.

To order memorial trees or send flowers to the family in memory of John Ellis, please visit our flower store.

Recitation of the Rosary